It was honours even at Sam Smith’s Park as Newcastle Benfield and Hebburn shared the points in the Northern League Division 1 on Saturday.

Luke Sullivan put the Hornets in front from the spot in the first half before being pegged back by second half goals from Dennis Knight and Jake Orrell for the hosts.

Sullivan was on hand again to grab the equaliser at the death.

Hebburn made a good start to the game and they thought they were in front just eight minutes in when Sullivan buried the ball past the keeper following a great ball by Ben Dibb-Fuller, but it was ruled offside.

Chances were few and far between after that until the visitors got a penalty in the 31st minute as Dan Groves was brought down in the box. Sullivan stepped up and placed the ball into the bottom-right corner beating the keeper.

Benfield came close again in the 39th minute when Scott McCarthy headed just over from a corner.

On the brink of half time, Reece Noble and James Novak had shots blocked for the hosts.

Their pressure continued in the second half, and Benfield grabbed an equaliser in the 56th minute when Knight blasted a shot on the edge of the box with some help from Hebburn keeper Andrew Jennison on the way in.

Three minutes later, Graeme Armstrong headed just over on the end of Lewis Suddick’s cross for the visitors.

Six minutes later, Brayson had a shot that went just wide after a great ball in from Orrell.

In the 78th minute, the hosts took the lead when Knight’s long range effort was parried by Jennison and Orrell put away the rebound.

12 minutes later, Hebburn equalised when Scott Wallace headed forward and Michael Richardson then played through Sullivan who beat his man and buried the ball past the keeper in the bottom-left corner.

Up next for the Hornets is West Auckland at home in the FA Vase 5th round.

Subs not used: Malley and Blackburn.

Sunderland got a step closer to Wembley with a 2-0 win over Manchester City U21s on a cold Tuesday night at the Stadium of Light.

Duncan Watmore and Lynden Gooch scored either side of half time in order to secure the win for Jack Ross’ side.

It was a fairly quiet start to the game, before City came close in the 14th minute when Benjamin Garre cut in on the left and his shot across goal went just wide of the mark.

Eight minutes later, Sunderland took the lead when Dylan McGeouch’s shot was blocked and Watmore was there to blast the rebound past the keeper in the bottom-left corner.

Watmore could’ve had his second of the night in the 27th minute when he cut through on goal but his effort was kept out by the keeper.

Five minutes later, Bryan Oviedo hit the crossbar to the right from a free kick.

Sunderland’s dominance continued after the break and they came close in the 57th minute when Watmore worked well on the left before he gave it to Luke O’Nien whose shot went just wide.

City had a rare chance two minutes later when Tom Dele-Bashiru fired just wide of the mark from close range.

The hosts’ second goal came in the 65th minute as Adam Matthews worked well with Gooch on the right before the latter buried it into the bottom-left corner from long range.

Two minutes later, O’Nien almost made it three when his shot was just stopped on the line by keeper Daniel Grimshaw following a great ball in from the right.

Chances were few and far between after that, but at the death Sunderland substitute Lee Connelly’s effort was pushed just wide after a great ball in from Oviedo.

Next up for Sunderland is AFC Wimbledon at home on Saturday 2nd February.

Morecambe made it six games without a win as they fell to a 2-1 defeat to Stevenage at the Globe Arena this afternoon.

Ben Kennedy put the visitors in front from the spot before Kevin Ellison equalised for the Shrimps in the second half.

Luke Wilkinson then got the winner for Stevenage in added time.

The Boro started the game well and came close when James Ball’s free header was caught by Mark Halstead.

13 minutes later, the visitors got a penalty when Steve Old was adjudged to have tripped a player in the box. Kennedy stepped up and buried it down the middle.

Morecambe had a poor first half and their only real chance in the first half came when Jordan Cranston made a good run and cut in on the left before shooting straight at the keeper in the 45th minute.

Jim Bentley’s side looked better after the break and came close in the 57th minute when substitute Richie Bennett fired just over after a great ball in from Cranston.

Ten minutes later, Ellison curled the ball just wide from long range and shortly after he fired home to put the Shrimps on level terms after great work in the build-up from Zak Mills and Bennett.

The 39-year-old nearly got a winner in the 89th minute but his well-driven shot was parried and Bennett just missed out on scoring the rebound.

The referee shocked many by adding on eight minutes and in the fourth minute of added time Stevenage got a winner against the run of play when Wilkinson headed home at the far post after a great corner.

The visitors nearly got a third four minutes later when Danny Newton’s effort went just wide after a great run on the left.

The Shrimps came closest to equalising moments later when Sam Lavelle hurled his shot wide on the edge of the box.

The result means Morecambe now sit in 22nd just one point above the drop zone.

Jordan Fagbola put the visitors in front early on, before being pegged back with goals from Paul Dawson, Chris Marlow and Matthew Dudley.

Dawson added a further two in the second half to secure his hat-trick before Chib Chilaka got a consolation for the visitors at the end.

It was a game that was hard to predict on paper with the two sides sitting comfortably in mid-table.

Hyde started the game the better side and were in front within ten minutes when Fagbola smashed the ball into the top-left corner following a poorly defended corner.

Their lead only lasted nine minutes however, as Dawson linked up well with Callum Spooner with a good initial pass before the former headed home from the latter’s excellent cross.

Bamber Bridge later took the lead in the 31st minute when Marlow buried home at the far post following an excellent ball in from the right.

Brig continued to put pressure on the Hyde keeper as he did excellently to save efforts from Dudley, Matt Lawlor and Scott Harries in quick succession.

The hosts got a third on the brink of half time when Dudley’s free kick beat the keeper to the left.

Bamber Bridge were straight out of the blocks in the second half when Dawson headed just wide of the mark following an excellent ball from Marlow on the left.

Hyde came close in the 54th minute when Tom Pratt hit the bar, but they later conceded their fourth of the day just five minutes later when Dawson curled in the top left corner.

In the 69th minute Dawson picked up his hat-trick with a spectacular goal – curling in the top-right corner on the edge of the box.

The visitors continued to fight despite being four goals behind and they came incredibly close eight minutes later when John McCombe’s effort was cleared off the line by Spooner.

Hyde got a consolation goal in the 85th minute when Chilaka headed home from a corner from close range.

The result means Bamber Bridge move up to 12th in the table.

Subs not used: McKnight and Roccia

Subs not used: Olarewaju and Hughes 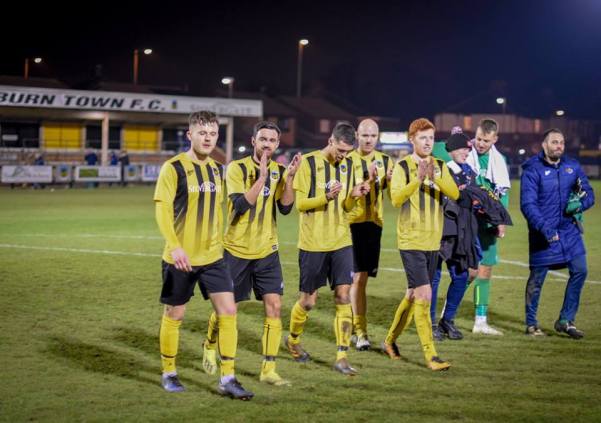 Hebburn Town made it through to the last 16 of the FA Vase with a 2-1 victory over Shepshed Dynamo today.
Niall Prenderville took the lead for the visitors fairly early on before Michael Richardson got one back just before half time and Luke Sullivan got the winner early in the second half.
Shepshed started the game the better side and came close ten minutes in when Pearson Mwanyogo’s effort went just wide of the mark.
15 minutes later, Graeme Armstrong headed just over from a corner.
The visitors then took the lead in the 35th minute when Prenderville headed home on the end of a great corner.
Shepshed were awarded a penalty seven minutes later when Louis Storey appeared to bring a man down in the box. Karl Whymark stepped up and the ball hit the bar on its way over.
The Hornets equalised in added time when Richardson’s volley was buried in the bottom left corner after a great ball in from the right.
Just seven minutes after the break, Hebburn got the winner when Richardson’s shot took a deflection off Sullivan on its way in after a great corner.
Scott Oliver’s side later went down to ten men in the 73rd minute when Dan Smith was sent off for a rash two-footed challenge.
It was a backs to the wall job following this but the Hornets defended really well.
Chances were limited for the visitors, and they came closest in the 87th minute when Mwanyogo’s close range effort was well saved by Jennison to the left.
The Hornets held on for the victory, and will find out their next opponents in the fifth round draw on Monday.
Hebburn Town: Jennison, Read, Tumilty (Smith 14), Donaghy, Shaw, Richardson, Storey, Spence, Dibb-Fuller (Robson 81), Armstrong (Chow 88), Sullivan.
Subs not used: Malley and Hubery
Shepshed Dynamo: Ganley, Wakeling, Betts, Pheasant, Acott (Patrocinio 85), Mwanyogo, Hurst, Prenderville, Moore (Thomas 75), Whymark (Roome 81), Melbourne.
Subs not used: Phillips and Day
Attendance: 795
REACTION

Stunning strikes from Jamie Devitt and Jack Sowerby gave Carlisle United a 2-0 victory over Morecambe on New Year’s Day at the Globe Arena in League 2.

The visitors came into the game in good form having won their last four games, while the Shrimps had won just once in their last seven league games.

Jim Bentley’s side started the game fairly well, but just 15 minutes in former Morecambe man Devitt took the lead when he hit the ball on the volley following a throw in and it bounced off the bar and in.

Chances were few and far between after this, and the next opportunity came just on the brink of half time when Tom Parkes headed over the bar following a corner.

The hosts came out after the break looking more fired up and youngster Carlos Mendes Gomes came close in the 60th minute after making a great run on the right only for his shot to go straight at the keeper.

Five minutes later, the youngster came close again after an excellent run forward from Jordan Cranston and his effort was pushed just wide by the keeper.

Carlisle doubled their lead in the 76th minute when midfielder Jack Sowerby fired into the top-right corner from around 30 yards out to beat Mark Halstead in the Morecambe goal and send the travelling fans wild.

Ashley Nadesan almost made it three two minutes later but his effort went just wide of the mark.

The win moves Carlisle United up to seventh in the League 2 table while the Shrimps sit 20th ahead of their game against Crewe Alexandra on Saturday.